on issues of identity, cultural heritage, and global citizenship.

For over two weeks, BLAACKBOX will invest the space of La Maison Commune in Ixelles,

near the art galleries of Avenue Louise, to coincide with the off events of the Brussels Gallery Weekend and we.art.xl

Between utopias and dystopias, the globalized African Diaspora is constituted by a universe of cultural fusions which never seemed as powerful as during the XXIst century. Relying on their Malian, Congolese, and Cameroonian heritage, Diarra, Kialeuka and Kemkeng Noah create unique images which translate their existential experiences of being Africans outside Africa. Stigmatizations, scars, and drowned identities becoming the many engines to fuel their pride, their richness, and passion for others. Today, all live in Brussels, and it is from here that they build visual bridges which echo their own life paths. Up to us to borrow these while the exhibition runs, or perhaps even long after that.

Franck Kemkeng Noah brings to light a Belgian architectural heritage and its History, by blending it with masquerades and animistic rituals from Western and Central Africa. Doing so, he aims to show us that two coexisting worlds can become one. His paintings serve as invitations to discover the other, whom we do not yet know, but also to rediscover ourselves through our own architectural heritage. Architecture and masquerades are two codified human expressions which abound with secrets hidden behind highly identitary facades. This body of work dedicated to Brussels can remind us of comic strips at the crossroads between the surrealism of Delvaux and the anime of Miyazaki. As such, the royal Tso dance of the Bamileke and the architecture of the Royal Saint-Hubert Galleries intensify the coexistence of complex worlds in which social rules and ways of thinking blend and recast.

Bruxellois for five years now, but perpetual migrant according to himself, Bayunga Kialeuka leaves Congo aged six, to reach the shores of Miami. He chose to transcribe his gaze on that African heritage in a unique triangular relationship, first in the USA, and later in Kinshasa. Today, the third point of that artistic triangle is being built around the centrifuge forces represented by Brussels and its myriad of encounters. Through four large portraits of people who marked the Belgian life of the artist, Kialeuka frees a representation mode which is both powerful and bewildering, between early XXth century modernism and militant African American painting – a style which he claims belongs to a movement he calls social expressionism, an artistic philosophy relying on the bridges between German expressionism and social realism, as expressed through the artists of the African Diaspora.

Thiemoko Claude Diarra embodies fusion. Born of a Bamana father who is traditional sculptor, and of a mother who was a Brussels-born nurse, his work meanders inside this dichotomy, between the spiritual and the rational, extracting from animism and anatomy the necessary ingredients for the creation of hybrid beings, modern citizens blessed with universal values. After a first series laying out his artistic universe titled Anatopia, followed by a body of work inspired by the pandemic which focused on the principles of Heterosis, it is now time for a cosmic renaissance. In this new series he calls Trance-Transfer, Diarra continues his research on notions of identity, absurdity, and encounters, all the while presenting us with a larger philosophy of the artistic universe in which his work is born, reAnimism, of which he presents the Manifest here. One must then merely dive into the Panel of the Donso Hunter (Donsoké) to feel absorbed into a compulsive dynamic at the centre of which movement becomes a symbol, and the whole body, a simple geometric vector of sacred expression.

The coexistence of these three bodies of work, in Brussels, in 2021, once again confirms the artistic diversity which feeds the capital daily, while the stakes of economic and climatic migrations destabilize the utopia of an ever-larger Europe. The Afritopias of these three artists inevitably guide us towards ourselves as much as towards the other, the one we know so little of, like so many invitations to a journey that we could make in both directions. 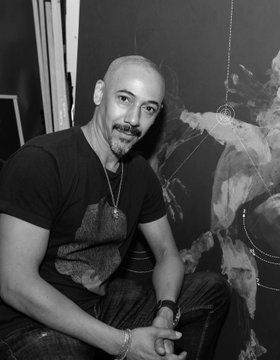 Born in Mali in 1974, Diarra lived between Bamako, Brussels and Dakar. His father is a Bamana sculptor and his mother was a nurse from Belgium. Thiémoko Claude Diarra sits right at the crossroad of these two cultures, between the sacred art of his ancestors and the heritage of those who advanced Western medical science through the centuries. 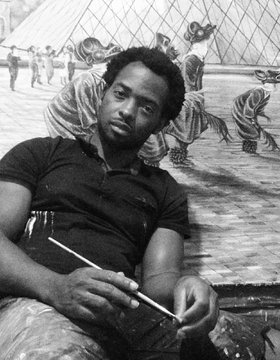 Born in Yaoundé in 1992, Franck Kemkeng Noah graduates with a Master in Fine Arts from IBAF. In 2017, he moves to Amiens (France) and follows a second Master in Artistic Research. Soon, he starts painting on abandonned carpets. The discarded household objects he finds on the streets become a new support for a series of works which serve as narrative points in the history of migrations.

A Congolese born narrative painter, curator, and mural artist, Kialeuka grew up in Miami (USA), where he worked as an artist before moving to other US cities, all the while variably travelling to DRC. His work focuses on themes of social realism, investigating society through the prismatic lenses of economic ecosystems, race and cultural identity.